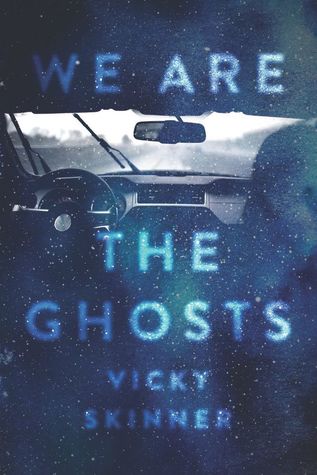 After her estranged brother suddenly dies, a girl embarks on a road trip to rediscover who her brother really was in Vicky Skinner’s contemporary YA novel, We Are the Ghosts.

When Ellie’s estranged brother, Luke, dies in a car accident, she’s not sure whether to be devastated that she lost the person who was once her best friend or enraged, still, that he left without a word a year ago. Now, the only people who seem to understand what she’s going through are Luke’s best friend and his ex-girlfriend, who she bonds with over their desire to figure out where Luke went when he walked out of their lives.

As she gets closer to them, and closer to Cade, a boy who seems determined to get to know her better, she realizes that she’s not the only one with reasons to be angry at Luke. And when Ellie makes a discovery that changes everything, she and her new friends hit the road, hoping that following Luke’s trail will bring them answers about the life Luke was living away from them.

EXCERPT
I have a sex dream about James Dean the night I find out my brother is dead. I watched Rebel Without a Cause before bed, hours before my mother woke me in a panic, and it’s all I can think about while she tells me Luke’s Mazda slid on an icy road, taking him right off the side of a bridge somewhere in Michigan.
I stare down at the dining room table, unsure of what to do. I want to tell my parents that they can’t be saying this to me right now because it’s the middle of the night and I have to work in the morning. Instead of telling them this, I think about James Dean. I think of him in my mind yelling, “You’re tearing me apart!” instead of my mother telling me that someone from the police station in Ann Arbor called her an hour ago, after they found Luke’s car upside down in the Huron River.
“Ellie? Are you okay?”
Later, when I think back on this moment, I’ll focus on the fact that neither of my parents is crying. Shouldn’t they be blubbering? Shouldn’t they be crawling over each other to get to me, the only child they have left? It feels like it should be that way, like pictures of parents when they’ve found out their children went away to war and never came back. But my parents aren’t crying. My father is staring down at the table, his eyes wide and unfocused, like he’s not actually seeing anything, and my mother is just staring at me. What is she waiting for? They’re not touching each other. My mother sits with her hands in her lap while my father keeps his arms on the tabletop. Neither of them reaches for me.
“Ellie?”
I know my mother is asking me a question, but I can’t see her anymore. Or hear her. My world goes fuzzy, and I stand up from the table, holding my stomach because I suddenly feel like all my insides are going to come spilling out, until I’m nothing but a lumpy mess on the carpet.
According to my mother, it’s pretty clear that his tires slipped on the wet road, so I don’t think they’d even do an autopsy. Luke never drove in the rain. After that time he skidded on his way to school and ended up facing oncoming traffic, he did everything he could to avoid it. I want to tell her she’s mistaken. That he slid off that bridge but that some kind bystander dove in after him, pulling him free and performing mouth-to-mouth on the edge of the highway.
But that isn’t what happened. No one saved Luke. Luke is gone. Luke is dead.
I’m chanting it over and over in my head as I move down the hallway toward the bathroom. I don’t make it all the way there. I throw up on the carpet outside of my parents’ bedroom.

Born and raised in Texas, I don’t act like much of a Texan. I like cold weather and hate country music. I have a gorgeous husband, two dogs, and a Literature degree from the University of Texas at Dallas. If I’m not at home reading a book or doing laundry, I’m probably at the bookstore, nannying three rambunctious boys, or stuck on the side of the road with car trouble. I’m a reader, a writer, and a bit of a crazy person.